Toyota Industries Co., Ltd. (hereafter Toyota Industries Corporation) set out its “2020 Vision” in 2011 and started to move toward new goals. However, the goal was high, and the same activities and ideas as before could not be used to draw the ideal image for 2020. At that time, Toru Inagawa, General Manager of TMHG’s Corporate Planning Department, launched a new project to embody the idea of ​​how to come up with new ideas and how to connect them to the business model. We asked them about their activities and the way of thinking rooted in the members through the project.

The pillar of management was born from the history of diversification.

Toyoda Automatic Loom Works was established in 1926 as Toyota Industries Corporation in Kariya city, Aichi prefecture, with the purpose of manufacturing and selling the automatic loom invented and developed by Sakichi Toyoda. After that, they promoted business diversification and expanded the business area to compressors for automobiles, engines, car air conditioners, industrial vehicles, and electronics. It is also the origin of the Toyota Group, including the current Toyota Motor Co., Ltd., which was established as an automobile manufacturing division and was later spun off. Today, 88 years after its founding, its production bases and sales network have spread all over the world, forming a large corporate group with approximately 50,000 consolidated employees and sales of over ¥2 trillion.

In the company, which has multiple business pillars due to diversification, the current sales by business are 50.1% for automobiles, followed by 40.3% for industrial vehicles. Industrial vehicles refer such as forklifts. The feature is that the company does not only develop, manufacture, and sell them, but also develops and produces logistics equipment and systems related to “conveyance,” “storage,” and “sorting”.

That is responsible for the industrial vehicle business, Toyota L&F (Logistics & Forklift). The history of Toyota L&F began in 1956 with the production of the first model “LA type forklift” at the Kyowa Plant. Their cumulative forklift production reached 2 million units in 2008, and domestic sales reached the No. 1 for 48 consecutive years in 2013. And they are building a solid foundation. 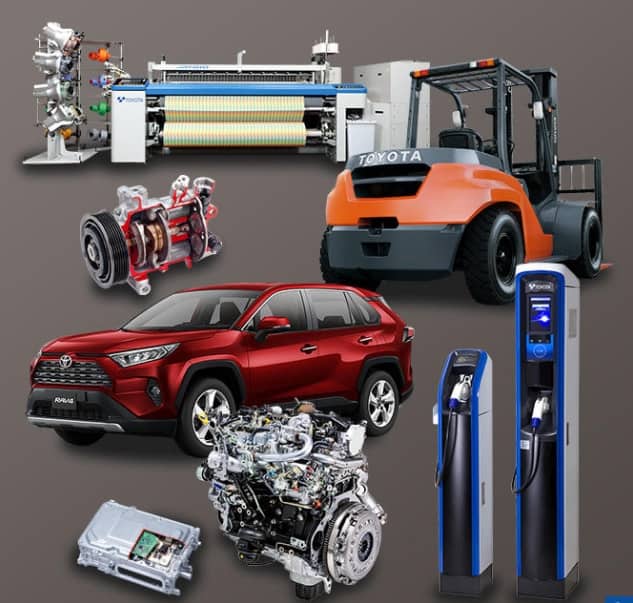 Challenge to new business with a view to 2020

The company had a strong foundation, but the 2008 Lehman shock was tough. The decline in sales forced them to make a final deficit for the second consecutive year, fiscal 2008 and fiscal 2009. Awaiting a recovery trend, the company set its “2020 Vision” in fall 2011. It was a compass of management for heading for a new stage of growth in a changing environment.

Toyota L&F was also trying to create a vision as a company and move toward high goals. Toru Inagawa, then General Manager of the Management Planning Department of TMHG and now Executive Officer, was recalling those days and said “To reach the high goals of the 2020 Vision, simply making a forklift, selling it, and continuing the traditional business model of after-sales service, I think it’s not good just to be there. It is necessary to concretely describe what we want to be in 2020, and we are looking for more utilization and application based on core areas to expand our business.”

Around that time, Mr. Inagawa attended a seminar held by JMAC. The seminar was “Profit Design,” which was about content for business development. Mr. Inagawa said “I think we can use a simple and easy-to-understand idea of ​​Profit Design by JMAC.”

Profit Design is based on JMAC’s unique consulting approach, which is drawn from three requirements: hook (element that attracts customers), lock (element that customers do not leave), and charge (element for customers to pay from the customer’s perspective). This is a method of creating a business that continuously generates profits by drawing a business mechanism (business model) that satisfies these three requirements.

Mr. Inagawa, who started the project after the seminar, said “It is important to sprout the future business and to give ideas, and human resources with such an idea, especially in 2020, who will drive the business as a person in charge of the future. I wanted them to grow in the core age of the company, and I was able to launch the project with the understanding of the company top and strong support.”

At the end of October 2011, Mr. Inagawa spoke to various departments such as sales, procurement, logistics, and product development, and 10 members were recruited through public recruitment and recommendation. Several consultants from JMAC participated in the team, and the “new business model construction project” at Toyota L&F started.

The project was completed 11 times in half a day and took 3 months, and 69 ideas came out from the members. The consultant in charge said “At first, we conducted a solid review of the current business and put out ideas while grasping our strengths. Everyone had many ideas, and I thought it would be good by changing the way of structuring the ideas.”

Kengo Imaeda, Head of Global Planning Group, Procurement Department, said “At that time, the vision for 2020 came out and I felt that there was a big gap with the current situation and how to fill that gap. It was easy to learn to create new business opportunities by sharing ideas on an even extension of the current business. I changed my mind to do something to fill the gap.”

Shotaro Hamanaka, Planning Group, Sales Planning Office, Overseas Sales Department, said “Because standardization had been rooted in the corporate culture, it was strong to work with a fixed mechanism, but it was a little weak to put together new ideas. I thought that it was a good opportunity for me to be able to put together the ideas for sales expansion that I had been thinking about in my daily work, and to be able to break my shell as my brain softened.”

At first, this project was started with the members doing some try & error, but when everyone thought about the three requirements, they had the same impression that their minds were cleanly organized. Then, it has been a great stimulus to have members from other departments who have never met each other and people with no experience in business.

The project proceeded by applying 69 ideas to the elements of “hook, lock, charge”, narrowing them down to 5, and putting together for the report as a concrete business model.

At the end of the project, Koji Honda, Global Supply Planning Office, TMHG Headquarters, said, “I was told in a very easy-to-understand way what to consider in order to make a business. At that time, I was just transferred from another department. I thought this idea could be used in my daily work, and now I am unconsciously thinking about what would happen if I applied the three requirements.”

In addition, Shinichiro Yagi, Group Manager, Planning Group, Sales Planning Office, Overseas Sales Department, said “JMAC gave me a new way of thinking that I didn’t have, which was very helpful. This way of thinking is helpful, and I think this activity could be a regular activity.”

Satoshi Shimizu, Sales Promotion Group, Sales Planning Office, Domestic Sales Department, said “I am in charge of advertising, and when thinking about advertising this year, I naturally practice what to hook and what to lock. I think that these three elements can be used in situations such as how to communicate to the other people.” The new way of thinking is being utilized in daily work.

The consultant in charge said “As the project nears the end, I heard that “Who will do this” and everyone was excited. With the ease of understanding “hook, lock, charge,” I’m very happy that the idea has permeated and can be applied to their daily work.”

Develop next-generation in a common language

Some of the five ideas came out from this project are progressing toward concrete efforts. Regarding the involvement of JMAC, Mr. Inagawa said “I don’t think we could promote this kind of project by ourselves. JMAC followed our point of view and arranged it according to the current situation. Sometimes I had my back pushed, and above all, I was able to come up with many hints for promoting it while thinking together.”

Mr. Inagawa said “As the project progressed, “hook, lock, charge” became the common language to all members, and the basis of the idea was created. What the members commonly say about good point is to hold regular project meetings. As the number of participants increases, the number of members who have a common language will increase, which will become the foundation for thinking and perspective. In addition, various ideas may emerge depending on the organization such as hierarchy, generation, senior group, and hybrid. It is also a good point about Profit Design.”

Mr. Inagawa said “In the past, the perspective of business continuity and constant profitability was weak, for example, sales departments tended to have short-term thinking such as sales volume and share. However, with Profit Design thinking, I was able to learn how to draw a business model. In the future, I would like to increase the population that can understand and practice common languages. Through such activities and ideas, I hope the next-generation human resources grow up toward 2020.”

The company has been promoting diversification while taking on the challenge of stable business operations. Mr. Inagawa says “Creating the next business sprout begins with the development of creative human resources.” The new challenges by Toyota Industries Corporation are promising.

Business is born one after another only if the way of thinking is rooted.

Many companies are engaged in activities to create new businesses. However, there are many situations in which the idea is stagnant by unconsciously sticking to the common sense of the existing business. Individuals with various experiences repeatedly discuss and inspire each other in a new concept/viewpoint with common language, and comes up with a small idea that shines brightly. I think the real pleasure of the project is to assemble them into a business. We believe that our mission is to provide a place with the way of thinking of business, the viewpoint of ideas, the method of idea generation, and the safe discussion.