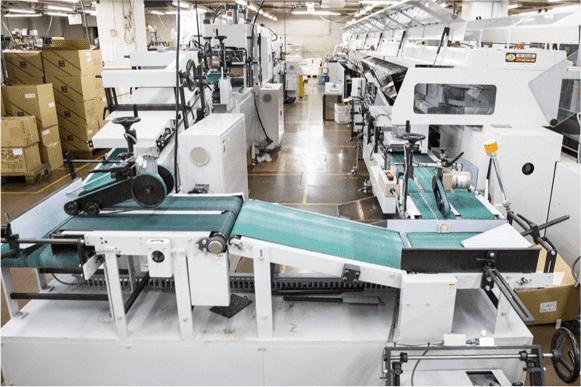 Fostering “the leaders who understand the improvement activities” and accelerating the organizational reformation – Manufacturing and human resource development of Shinjudo, a long-established notebook manufacturing company –

In 2013, Shinjudo, the main factory of the business notebook called “NOLTY”, started the challenge of “zero delivery delay”. How has the employees of the craftsmanship changed through the two pillars of “reforming the awareness of delivery time” and “developing the leaders”? How did Mr. Murakami, who was appointed as the new president from another company in a long-established store that has been in the business for more than 60 years, transfer his thinking to them? Now the people and organization of Shinjudo are changing dramatically after they have continued their steady activities while struggling with such a question as “Will people really change?” This time, we asked Mr. Murakami about the trajectory of his activities and his future prospects.

Since its founding in 1950, Shinjudo has specialized in notebook manufacturing. Since 1952, they have been working with the Japan Management Association Management Center (JMAM) to create a business notebook called “NOLTY”, and in 2013, more than 60 years later, it became a JMAM group company with the aim of making a further leap forward.

The creation of high-quality notebooks called “NOLTY quality” is supported by the craftsmanship that has been passed down from generation to generation. Unlike binding, where everything is finished in one production line, the pocketbook requires man-made work for every 20 or more short steps. It is very difficult and important for the pocketbook production to match the ruled line of the left and right pages exactly, and not to attach a single small stain. Shinjudo has continued to make it a matter of course in producing about 8 million pocketbooks with approximately 2,000 types annually, mainly for NOLTY and corporate notebooks.

While continuing to make such high-quality pocketbooks, Shinjudo had a big problem. The customer’s trust was lost because of delivery delay. Mr. Satoru Murakami, who was appointed as the president from JMAM in 2013, set out a policy of the reformation as an urgent management issue. “Because we cannot deliver properly on the fixed delivery date, the ordering sides cannot order with confidence. Not meeting the delivery date is the biggest cause of losing the trust of the customers. Let’s first achieve “zero delivery delay” and regain the trust once more. That’s where we started.”

In 2013, under the new management structure, Shinjudo’s challenge to “zero delivery delays” began. 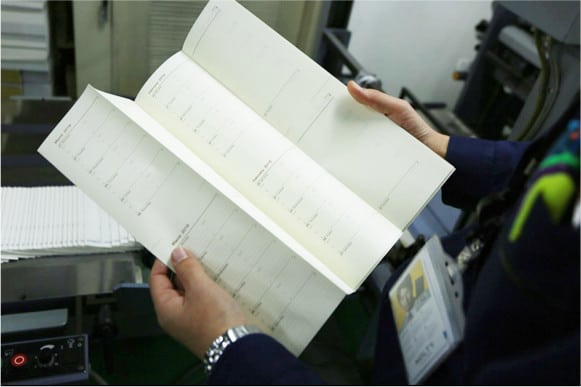 When starting the reformation, Mr. Murakami first conducted the individual interviews with all employees. “In order to drastically change the organization, it is important to take out the pus at first, and I heard various things about their ways of working and difficulties”. As the result, it was found that the main causes of the delivery delay were the following two;

Mr. Masao Unno (Director, General Manager of Production Division), who was appointed as the plant manager from JMAM with Mr. Murakami, was present at the individual interviews. He said “Shinjudo received many orders from companies and through agents, and every year there was always an order for orders. It seems that there was little awareness of the problem with the delivery date. There was one person in charge of delivery, but all others were flat in the organization.”

Mr. Murakami felt that it was necessary to nurture people first in order to aim for “zero delays in delivery times”, and promoted the human resource development based on the following two pillars;

(1) Reformation for the awareness of delivery time

(2) Development of the management leaders

First of all, regarding “(1) Reformation for the awareness of delivery time”, it was customary to hold the morning meetings every Monday, and repeatedly explained the importance of delivery time. Mr. Murakami says “The morning meeting once a week was a place for education.”, and recalls “At first, everyone felt like ‘What are you saying?’, but I think it gradually spread out using easy-to-understand cases.” “In the beginning, everyone retorted to stop the machine for the morning meeting, but now everyone stops the machine and participates no matter how busy it is.”

In addition, with regard to (2) Development of the management leaders, we gradually developed the awareness as leaders by placing the leaders in each workplace to lead the morning meetings and list “things to do today (product number, item, and quantity).

In addition, three years ago, in order to acquire the knowledge at the production site, everyone began to take the “Production Meister Course” (JMAM correspondence course). Mr. Murakami says, “Until then everyone understood ‘quality’, but it was very good that we could have a common language such as ‘I understand what you mean by saying this kind of thing.'”

On the other hand, he also felt that it was difficult to link that knowledge to the real work, and as a breakthrough, they started the “P course” (on-site improvement practical training) with JMAC support. The “P” of the P Course refers to “Production”, and its main focus is to develop the core human resources for KAIZEN activities to be carried out at the production site. It was the best training for the goal of “(2) Development of the management leaders”.

The last year, the first year for P Course, was rather passive, but this year in the second year, they went forward with production a little ahead of the schedule according to the P Course. Mr. Unano says “This year, three young leaders took the course. I think it was hard, however, it seemed to be fun because the previous learning led to the practice. We had the lively discussions with the newcomers of JMAC and JMAM who took the course together. I think we had a very good experience.”

In addition, this year, they also worked on the skill transfer in the P Course. Until then, they had done OJT for 3 to 4 months for young people with the retired senior colleagues who came to help during the busy season. In order to eliminate the things which cannot be used in words and letters, they also tried to analyze the skilled craftsmanship and incorporate it into the procedure manual.

The P Course is one of the practical training programs offered by JMAC in order to quickly develop the ability to improve autonomously at genba through;

Using the company’s production site and the actual production lines as teaching materials, the real problems can be extracted and solved together with JMAC consultants.